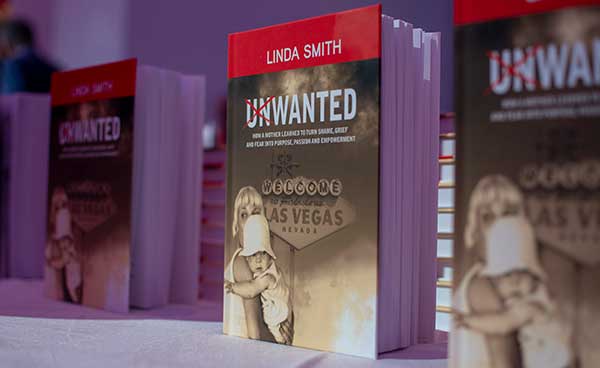 Reaching a milestone of 1,000 copies sold, Smith’s inspirational story is also now
available in public libraries across the U.S.

Reaching a milestone of 1,000 copies sold, “Unwanted,” her debut memoir, chronicles her life as the survivor of childhood abuse and mother of a disabled child who became a fundraising icon and relentless advocate for people with disabilities. Released earlier this year in paperback and hardcover, the book has now been converted to an audiobook.

Priced at $24.95 for hardcover, $14.99 for paperback, and $9.99 for eBook, “Unwanted” is available for purchase on Amazon, Barnes & Noble and iBooks. All proceeds from Smith’s book benefit The Christopher Smith Foundation, an organization dedicated to supporting those within the professional caregiving field who care for vulnerable citizens living with profound disabilities.

Synopsis – “Unwanted”
Linda Smith grew up impoverished, neglected and abused, but knew a great destiny awaited. She had no idea her life would take the turns it would, or deliver her from fear and guilt to triumph and unconditional love. A high school dropout turned model actress, Smith married a popular Canadian entertainer and built a life together traveling across two countries while becoming entrenched in the Las Vegas celebrity community. Linda had achieved a pinnacle she never thought possible—and then it all came crashing down.

When Linda gave birth to a Down syndrome baby, she was certain life as they knew it was over, but instead, their son Christopher became a catalyst that catapulted Linda onto even bigger stages. Behind the glitz and glamour of the Strip, she produced charity events and concerts for a cherished disability organization, learning the job of fundraiser among millionaires, mobsters, and city movers-and-shakers. She became one of the nation’s most successful fundraisers, raising over half a billion dollars for disability causes, but her most cherished role was as a mother, seeing Chris exceed all expectations and become a force that changed not just her life, but their entire world.

A lifelong fundraiser, Linda Smith draws upon her professional and personal experience as a storyteller, writer, motivational speaker and disability advocate. Smith speaks with expertise on non-profit fundraising, community relations and event management. Since the birth of her son, Christopher, Smith has dedicated her life to be the voice of advocacy for people with disabilities. In March 2019, Smith became a published author with the release of her memoir “Unwanted.” For more information on Linda Smith and “Unwanted,” visit https://lindaslife.com/ and follow her at @livelindaslife on Facebook, Twitter and Instagram.