Does your business, organization or event need to be inspired? Create purpose, passion and empowerment as Linda shares her life and accomplishments.

"Linda Smith is a consummate philanthropic professional who leads by example. I recently experienced Linda's multi-media presentation to the Association of Fundraising Professionals (AFP) and found myself captivated from beginning to end by her scope of knowledge and strategy, her charisma and her motivational style. Impactful, inspirational, memorable – all describe Linda Smith!" Beth M.

“Woman of Achievement” Award from the Las Vegas Chamber of Commerce

“Distinguished Nevadan” award for exceptional service to the State and Nation 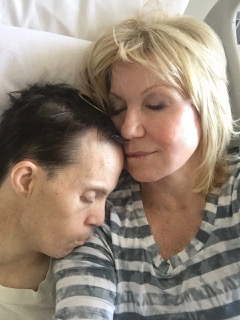 A fearless and tenacious fundraiser, author and motivational speaker, Linda Smith revolutionized the principles of non-profit fundraising, community relations and event management, while gaining an international reputation as an innovative leader, fundraising guru and most of all, a humanitarian.

A dynamic speaker with a great story to tell that resonates across all audiences. Surviving homelessness and abuse, Linda transformed her life as a successful dancer and model, and after the birth of her profoundly disabled son, she took on the Las Vegas establishment, its city leaders, the mafia, the US government and more in her fight for equality for her child with down sndrome. Along the way she raised a billion dollars for charity and learned that No is just the beginning of a negotiation. There is no one in this world like Linda Smith and her story will inspire your team to greater heights.

Lindas Life is more than her long list of accomplishments...It’s about joining together to fight on behalf of the most disenfranchised humans on the planet, to welcome and celebrate integration and diversity, to turn an idea into a reality and transform the misfortunes life delivers into the fuel that drives people forward to then say with relentless conviction.

After raising over a half a billion dollars for Opportunity Village, Nevada’s largest organization for people with disabilities, Linda embarked on a crusade to spread her talents and help others around the world.

Securing the largest single gift of $35 million for a local disability organization, followed up with a $40 million Estate gift.

A five-year effort by Linda to involve superstar vocalist Celine Dion in a benefit concert and raising $1 million in a single day.

Creation of a fully funded $5 million Endowment for social recreation and arts named for her son Christopher, through which people with profound disabilities have access to programs to enhance their physical and creative talents and boost their self-esteem.

Linda launched a comprehensive Capital Campaign with a 5-year goal of $136 million by 2018 and raised $141 million in gifts and pledges by mid-2016.

Linda has the innate ability to engage major corporations, philanthropists and entertainers to support her cause. Celebrities who have become friends and supporters include Brad Garrett, David Copperfield, Wayne Newton, Celine Dion, Tom Jones, Shania Twain and Penn Jillette, whose recent appearances on Celebrity Apprentice raised over $2 million for her charity.

UNWANTED | A Book by Linda Smith

“Unwanted, is a heart-rending story of a woman’s pursuit of acceptance for her disabled son. Linda Smith has a rare blend of talents, all on display in this must-read book of innocence lost, then reclaimed, and soon after pounded into submission.” —Wayne Newton, Entertainer, Mr. Las Vegas

“Linda Smith, the angel of Opportunity Village, has written a remarkable life story filled with triumph and heartache. But at its essence, this is a story of a mother’s love for a son named Christopher born with Down syndrome at a time of great misunderstanding and misinformation. Their relationship is a reminder that love does indeed conquer all.” —John L Smith, Author, winner of the Silver Pen Award.