The end of the Las Vegas summer, combined with crisp Southern Nevada air, means another spectacular day is in store for Christopher. Today my boy will drive his adored go-cart, he will drive his car every weekend for the next nine months until the summer heat signals the last lap. And so out of the garage it comes, gleaming shiny red, Christopher’s red cart, it is a fine machine.

The car is his fourth, the first three petering out after thousands of laps, driven by a boy who joyously tromps up and down on the pedal, yanking the wheel beyond its intended design. The previous go-carts, with a rope and grip starter action powered by a centrifugal clutch, did my back in many moons ago. This new conveyance has a convenient starter switch, and I marvel at this simple concept, bemoaning the fact that life could have been easier, had I just researched the mechanics of these little carts further.  And so, I gas her up, perform amazing contortions to allow my own body to enter the little car, and take the obligatory lap to ensure the gears are working, the tires will stay on, and the chain has not parted from its sprockets. Once around the garden path for Mom and It checks out in fine working order. I extricate myself from this small space.

My son is multiply disabled and weighs 91lbs. soaking wet. The little red car is his independence, and he maneuvers it like a large trucker would.

As always, the low-slung, sleek, four-wheel vehicle brings never-ending, unadulterated joy to my boy. He is the boss of this machine, a racer like no other. In seeing his car at the ready, he gives me a heartfelt hug before loping down the path in his Down syndrome gait, to his prized possession; “Christopher’s Red Cart.” Climbing aboard, he flips the ignition switch on and off multiple times, to show his mom that he is in charge, and, off he goes around and around. Mario Andretti would be impressed. At every lap, a wave, or, a wave off. One never knows. He is in his own world. This has been his routine for 25 years.

I knew at his birth that my son would never drive a traditional vehicle, nor would he achieve the kind of success that parents dream for their child. He would not marry, go to college, buy his old mom a home, nor invite her over for a BBQ. He would, however, love without abandon and inspire kindness. He would shape lives and provide a daily reminder of the marvelous diversity of humanity. 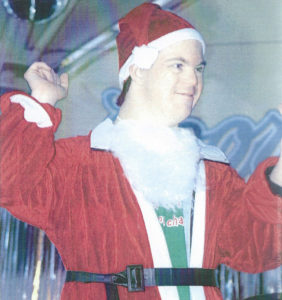 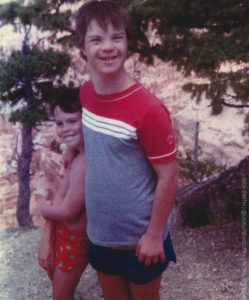 The acquisition of a car for Christopher came after a day at Scandia Fun Center. On this day, Chris, age 15 and his little brother Jason age 8, had just completed a round of mini golf and it was Jason’s wish to ride the Mini Grand Prix go carts. Christopher and Mom would watch from the sidelines. But on this memorable day, he had other plans. Once his brother chose his car, Chris ran to the empty car in front as I reached to pull him back. The kind attendant, noting Chris disability, took pity and offered to give him a ride in the lead car. This eventful ride was meant to be just a lap or two with a Scandia staffer riding shotgun, but once seated in the machine, Chris tromped his foot on the gas pedal and took off down the track in the lead vehicle. Alone. 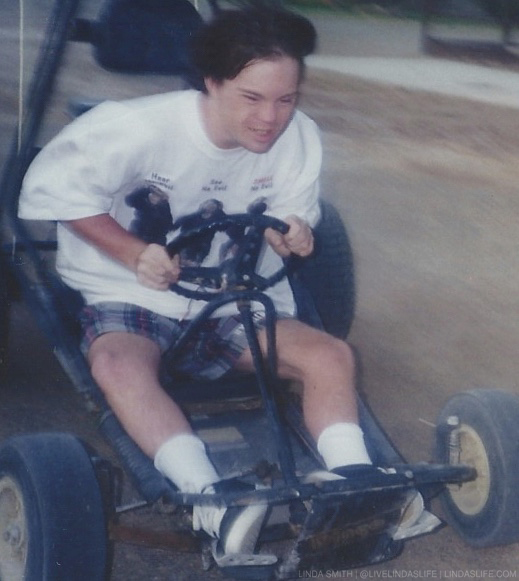 This is the day that the Mini Grand Prix had to shut down operations.  My child was not to be stopped. He circled the track ignoring the checkered flags, the yellow flags, the whistles, shouts and arm waving of the concerned staff as they attempted to entice him to reign in his cart.  Angry parents glared at management and the offending mother as they waited in frustration for their own child’ turn. At one point a contingent of Scandia staffers placed a barricade of cones leading to the exit ramp expecting Chris to pull over. Instead, he crashed through, delighting in this obstacle course that he assumed was provided for his added enjoyment. By now a large crowd gathered at the fence as word spread throughout the park “retarded kid on the track.” He was soon cheered on by the onlookers, roaring their approval as he sped by, a wave and thumbs up from the appreciative crowd. My boy circled the track for an hour beyond his first lap. Oh, the joy on his face, it was an empowering occasion for him.

So, it was to be that I purchased the first of four go-carts, and they have circumnavigated the pathways of our home, 4 hours a day, every weekend except summer months, round and round, for twenty-five years. Chris could never master the brake action, so his ever-patient stepdad John, resigned, dismantled the brakes. Chris has found a way to discern the distance of an anticipated stop and can do so on a dime. My profoundly disabled son is a genius!

This is how I spend my weekends watching this little soul who was entrusted to me, and I am grateful for the opportunity to witness simplicity and unadulterated joy and happiness.  Some people I know feel sorry for the life that I live, but I wouldn’t change a moment of it, not for all the tea in China. I would choose this boy over and over again in a million lifetimes. He changed my life for the better. He inspired a Village, a Forest, 10,000 Santa’s and thousands of donors and was the catalyst of a movement that would put Nevada at the forefront in disability care.

What lessons I have learned from this child. What peace and tranquility.

The go-cart represents a freedom known only to him.  He circles the gardens clicking off the hours and the miles, as we, each contemplate the worries and the fears of the world.

Every two hours I hold up the gas can to get his attention, he pulls over, fooled each time, and I provide nourishment and apply lotion. His beautiful blue sparkling eyes penetrate deep into my soul as I search for the meaning of the gift of him.